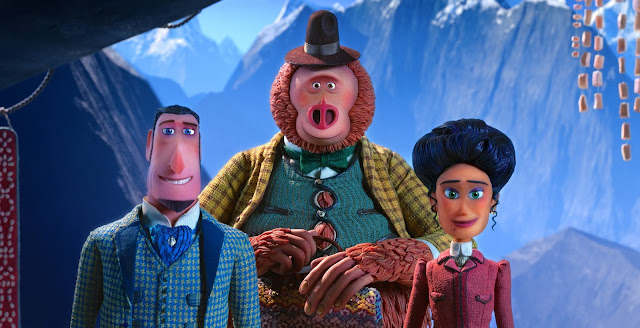 Back in February, I had the incredible opportunity to fly to Portland, Oregon with Elevation Pictures to tour LAIKA Studios and visit the set of their newest and most ambitious film yet: Missing Link.
For those of you who aren't familiar with LAIKA, they are the American stop-motion animation studio responsible for Coraline, ParaNorman, The Boxtrolls and Academy Award nominated Kubo and the Two Strings.

When we arrived at LAIKA Studios, we were greeted by production manager, Dan Pascal who brought us to our first stop of the day, the screening room to watch the Missing Link trailer.

I was immediately drawn in by the incredible beauty and detail of this stop-motion film and its upbeat soundtrack.

The film is full of fun adventures and takes you through 110 sets and 65 unique locations, making this LAIKA's most ambitious film to-date.

Paul Simon's "Me and Julio Down by the School Yard" starts playing as we're introduced to the film’s main characters, a myth & monster investigator who goes by the name of Sir Lionel Frost {Hugh Jackman} & a Sasquatch-like character named Mr. Link {Zach Galifianakis}.

If you've been following me for a short length of time, you'll know I love Paul Simon so right away this had me intrigued.

Hearing this fun, upbeat song is a clear indication that this movie is going to be different than LAIKA's previous films.

The story is about Sir Lionel Frost's journey to the Pacific Northwest to prove the existence of a legendary creature known as the Missing Link.

In the screening room, we had a chance to speak with the director/producer of the film, Chris Butler who mentioned that when people thought of LAIKA movies, they usually thought of spookier films such as Coraline and ParaNorman.

Missing Link is here to prove that LAIKA is capable of much more than that.
Chris says, "LAIKA is a studio that tests boundaries and produces movies that others don't."

Chris Butler first had the concept for this movie 15 years ago and after 5 years from pre-to post-production, the film has finally come to life. 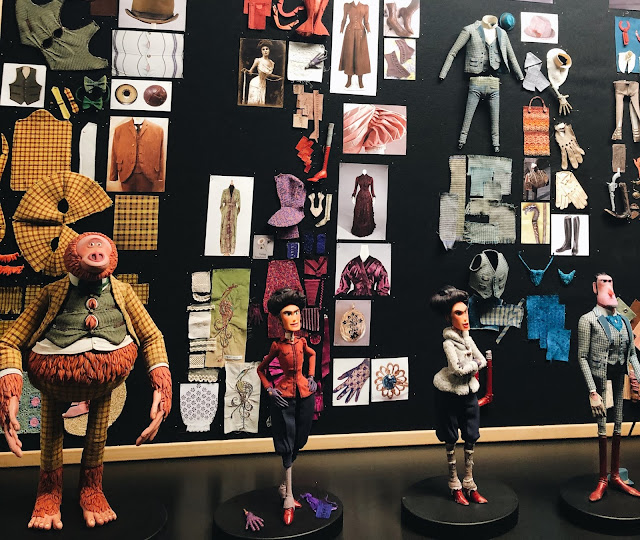 After visiting the screening room, we were taken to the back of the studio to meet with Costume Designer, Deborah Cook & LAIKA's Creative Lead, John Craney to learn all about the stars of the film: the puppets.

Deborah talked all about the materials and attention to detail used to create the character’s costumes.
There were many, many hours of research involved to find which materials would be the right fit for the costumes.
All of the patterns and fabric are printed in-house due to the length of production time and the necessity to have everything consistent for shooting. 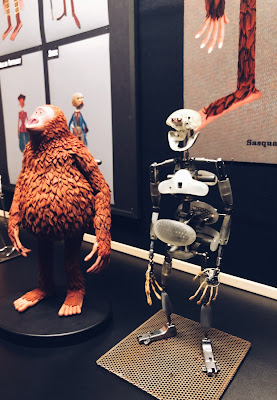 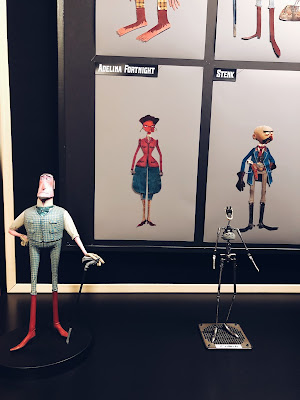 John showed us the mechanisms used to manipulate the puppets.

John explained that he and his team are responsible for everything from the neck down and head up. 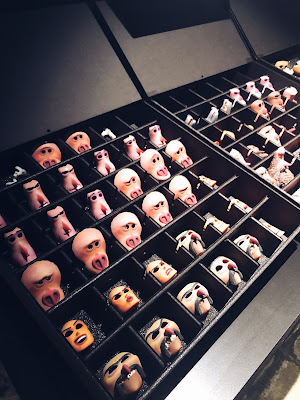 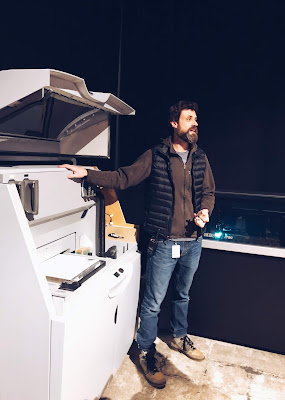 To learn all about the impressive facial expressions, we spoke with LAIKA's Director of Rapid Prototyping, Academy Award Winner: Brian McLean.

Brian talked to us about replacement animation, which has been around for at least 100 years.
The difference with LAIKA is that instead of hand sculpting the different facial expressions, they are modelling them on the computer and using a 3D printer to make them come to life.
Once the many faces are printed, they use little tiny magnets that the studio buys in hundreds of thousands to attach the faces to the puppets. 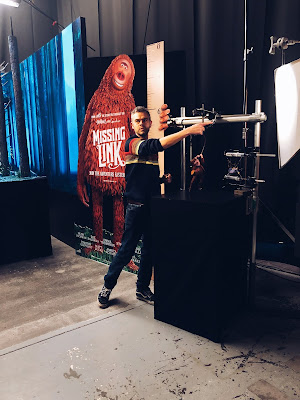 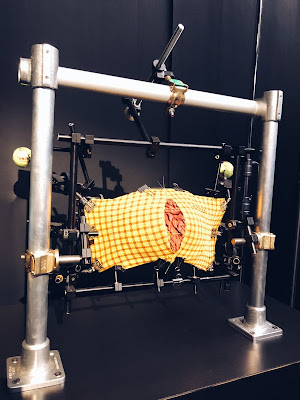 Next we met with Ollie Jones, Head of Rigging.

He showed us all the various rigs they use to make the puppets come to life.

Each puppet has a little mechanism built in the back of them to control the movement but there are also various scenes specifically created and rigged, like Mr. Link’s bum on the top right.

I thought my kids would think this was hilarious and had to snap a photo haha. 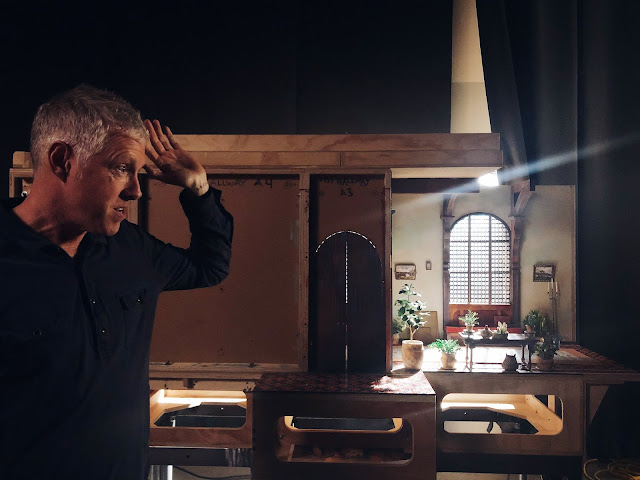 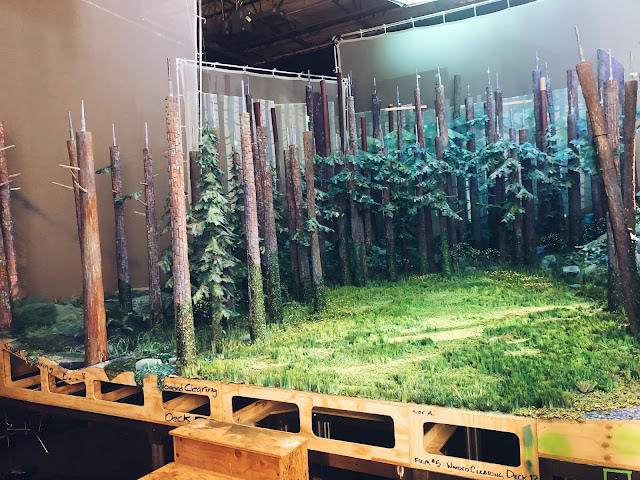 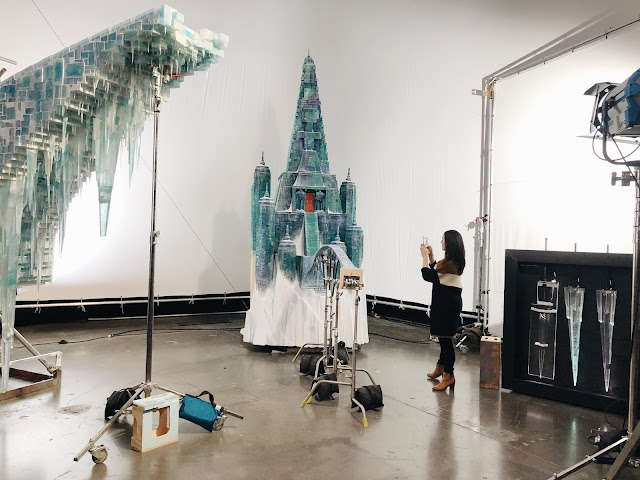 After a delicious catered lunch, it was time to talk art and tour the actual sets of the movies with Production Designer, Nelson Lowrey.

It was absolutely incredible to be able to see the actual sets of the film in real life.
Some sets were big enough to stand in and others were so small my hand was bigger than the pieces in the set.
I can't possibly put into words the tremendous amount of detail that goes into each one of these sets.

It was also pretty cool to stand where one of my favourite actors and stars of the film stood at one time.

The actors are a part of the stop-motion process from the very beginning.
This way, the animators can recreate the actors’ expressions on the puppets. 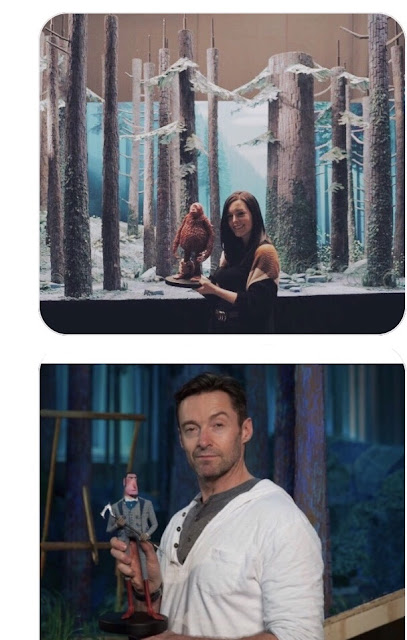 The day ended talking all things visual FX with VFX Supervisor, Steve Emerson.
The entire film is 1486 shots, which are 200 more than Kubo.
There's more detail in this movie than in any other film LAIKA has ever created.
At the end of the presentation, Steve explained how the goal is always to tell a story, without thinking it’s stop-motion.

I left LAIKA extremely excited to see the film.
The art of stop-motion film is absolutely mind-blowing.

As Dan Pascal told me, stop-motion is definitely not the easy route to take if you want to make a movie.

Missing Link will be in theatres everywhere April 12, 2019.